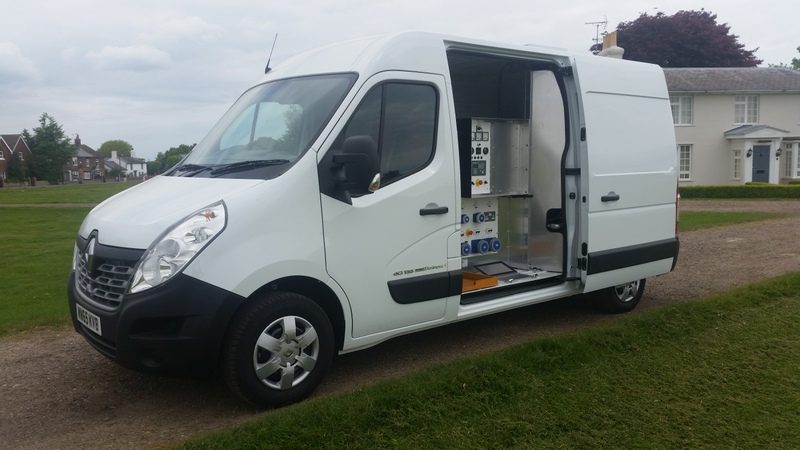 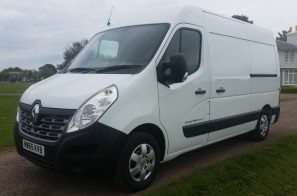 Provision have recently taken delivery of a Renault Master MM35 van converted to house a 40kW 1ph generator for use around Manchester.  The requirement was to have a generator vehicle built that did not look like a “generator” and more like a standard panel van.

The ASGB team worked with Renault to source a template van, then accurately measure the axle payload capability and designed the  enclosure, 200 litres of fuel storage and allowances for driver, passenger and stowage.

The design uses lightweight aluminium construction and the combination of a very good power to weight ratio VW engine, a Mecc ALte alternator and a specifically designed radiator arrangement with ingenious use of space.  Gradually the enclosure was built, the generator set fitted and at each critical stage the weights noted and logged.

Positioning the fuel tanks during the build, over the rear axle also meant that maximum usage of the payload capability was utilised.

The all up weight of the vehicle wet, with driver and fully fuelled was 3395kgs and within each maximum axle weight.  The vehicle utilised floor air intake and roof mounted exhaust which when the actuator and flap are stowed leaves the van looking like any other delivery van.

Generator fuel tanks are completely hidden with access via rear doors to a large filler neck and cap.  Balance pipes and taps have easy access as does the side door accessed control panel and distribution panel.  Cable access is provided in the van floor and a common alarm buzzer to alert the user of any alarm situations not immediately obvious when running with doors closed.

The van was delivered to Provision in early June and has completed shoots for ITV on the Coronation Street set.  Sales & Operations Manager Stuart Grant was very happy with the performance of the vehicle and the feedback from clients, saying how easy it was to use and how inconspicuous the generator was on set, which was the aim of the project.