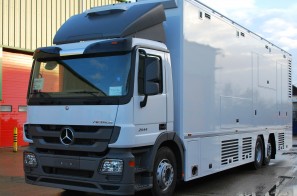 December 2013 saw the PDI and customer acceptance of a 12m Mercedes Benz 2544 rigid 26 ton capacity OB van destined for JRTV (Jordan Radio & TV Corporation) via Sony MEA based in UAE.   Jordan Radio & Television Corporation is the state broadcaster for Jordan and was founded in 1985 with the merger of Jordan Radio and Jordan Television companies.

Manufactured with a single expanding side of almost 6m by 1.3m, the truck has a rear mounted 4 bay rack room, to reduce the amount of noisy equipment in the Engineering working environment.  It has separate Engineering and Production rooms with expansion plus a separate fixed size Audio room.  The expanding side creates a lobby area where access can be gained to Engineering or Production without disturbing the other area.  The lobby provides storage space for camera and lens equipment by means of a fine wooden cabinet, hand crafted by ASGB carpenters, with a fold down work shelf giving additional flexibility when operational.

The truck has a scope specifying the potential use of between 9 and 12 cameras.  The scope of works was very exacting and requested that the truck and air-conditioning be suitable for the rigours of the Jordanian roads and environment.  For this requirement, the A/C plant has been chosen to provide partial continued operation even if a unit should fail, using two smaller units per Engineering & Production areas, rather than one large unit.  (This also aided to fit the quantity of A/C plant within the OB space limitations).

The rear end design incorporates 12 triax cable reels in a 10 plus 2 arrangement, plus a 2 bay patch panel.  Power connections are also, unusually, at the rear, with the input panel specially designed to allow for the input power cables to connect and allow the rear protective awnings and rear doors to stow whilst connected to the mains.

The truck holds almost 60kW of cooling A/C plant which is sized to operate between -5 degrees C and 50 degrees C ambient conditions.

The client claims that the OB will be the first OB in Jordan to have UPS systems fitted.  ASGB has worked with Sony MEA to specify, order and fit the UPS to give the required run on times in case of power loss.

The OB van was despatched to Sony PSE premises in the UK, to be system integrated in the UK by independent SI engineers before returning to ASGB in 2014 for heat tests to prove the air-conditioning with a full complement of broadcast equipment on board, the heat tests being completed in ASGB’s paint shops whilst fully powered with as much load applied as possible to the vehicle’s equipment.

When complete the OB will join the small fleet of JRTV (5-10 vehicles) in Jordan circa March 2014 after handover and commissioning with ASGB assistance.