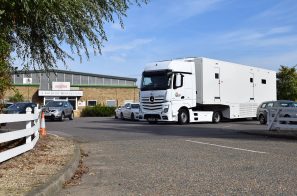 The fourth of NEP Australia’s four new iOB trailers departed for the docks this week completing another successful project.  Upon its arrival in Sydney in approximately 6 weeks’ time this will bring the number of ASGB built OB trailers in Australia to fourteen.  Seen here is NEP’s Peter “Gus” Angus ceremoniously receiving the keys to his new trailer before it departs.

These four iOB trailers are identical with the exception of the carefully considered colour of the interior wall finishes to give each iOB its own identity.

The planned remote production in Australia using these smaller units was presented at IBC 2017 by Marc Segar, NEP’s Director of Technology to an appreciative audience and we are proud to be part of the ongoing change and development in the world of outside broadcast being led by NEP.