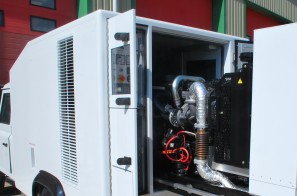 ASGB has recently delivered a 45kW generator body mounted on a free issued Land Rover 130 chassis.  The challenge for ASGB was to extract the highest possible electrical output rating whilst meeting the relatively low rear axle loading of the chassis.

Firstly the standard 130 chassis cab had its rear suspension stiffened and up-rated by fitting stiffer springs and stronger shock absorbers.  This was to counteract the permanent operation close to full axle loading value.

With the interests of our client paramount, the acoustic enclosure design evolved during the build as all aspects of weight saving were taken into consideration.  The body was constructed entirely from aluminium to give the maximum possible payload.

The end user had specified good working access to the engine and alternator, this being achieved by the components being mounted onto a rear pull out slide base mechanism.

The generator set utilised a Perkins 1104TD engine coupled with a Mecc Alte alternator.  The set was manufactured with a control panel enclosure to the rear housing the ComAp Intelilite controller and gauges.  A lower panel enclosure provided an output panel which contains two 63A C-Form and a set of Powerlock outlets.  The set can be switched from 1ph to 3ph operation giving a flexible 45kW output availability at full load in UK ambient conditions.

The set can carry in excess of 130 litres of fuel in dual balanced tanks.  This is adequate to allow the generator to run for a full working day without concerns.  The Land Rover fuel tank has remained totally independent.

The completed vehicle offers a substantial electrical output in a vehicle simple to drive and able to easily reach remote locations where there may previously have been fear of sinking or grounding less suitable vehicles.  The challenge of the power to weight issue has been resolved due to close attention to detail during design and build.

The Land Rover was completed in a very reasonable 14 week build which included a week plus of proving tests.