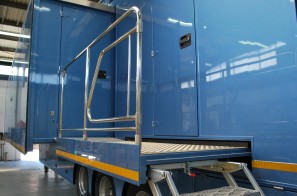 Supersport OB HD 1 returned to ASGB from completion of Systems Integration in early March, to undertake an air-conditioning proving test within the ASGB paint shop facility.  The OB, a tri-axle semi-trailer, on a 15.4m long ASGB built body, effortlessly houses the broadcast equipment to satisfy the requirements demanded by major sporting event coverage, such as football or rugby matches, the equipment being cooled by Mitsubishi Heavy Industries air-conditioning plant rated to give in excess of 50kW capability.  Unlike most OB vehicles, this truck does not use individual split units with multiple outside compressor units, but rather an office type single larger capacity unit mounted on the front of the swan neck area, with branch supplies and control boxes within the easily accessible ceiling void, to control and provide the necessary cooling.  This approach has freed up valuable space within the truck and has enabled the entire skirt level to be given over to useful stowage lockers.  Thus the front lockers were dedicated to the stowage of additional hand cable reels and camera support equipment.  Lockers also contain output supplies, intruder alarm panel, input power cable reel and panel plus the usual OB functional lockers such as technical batteries, hydraulics and AVRs.

Slight modifications were requested to the room and rack cooling arrangements compared to the previously supplied OB4 vehicle and these needed to be proved at a sufficient period of time at continuous +40 deg C ambient.  ASGB offered the paint shop as a test facility as part of the build contract and also the provided an array of monitoring sensors inside and out to monitor the van’s performance during the test.

OB HD 1 passed the test satisfactorily and in mid March was shipped from Southampton to Durban, South Africa to join ASGB similar builds OB4 and OB6 in the Johannesburg fleet of Supersport.