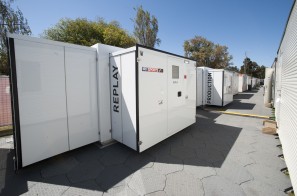 ASGB’s OBpods lead the field when it comes to modular outside broadcast facilities.  Working hard for Gearhouse Broadcast Limited (www.gearhousebroadcast.com) on the Formula 1™ circuit are four of ASGB’s OBpods.  Designed for easy transportation between racetracks around the world and with set-up and pack-down times to match, the modules are able to keep pace with the changing locations and environments to provide first class broadcast facilities.

When closed for transport the four pods have a combined footprint of only 29m2 but once the sides have been expanded they provide over 50m2 of air conditioned broadcast space. “The entry of ASGB’s expandable pods this season allows us to keep pace with the demanding schedule and the action being broadcast” says Kevin Moorhouse, Chief Operating Officer of Gearhouse Broadcast. “Once inside the weatherproof air conditioned room it is difficult to believe this has all been achieved from a standard air cargo footprint.”

These broadcast pods will accompany the Formula 1™ production teams to all the races around the world, transported from circuit to circuit by air.  Calling on ASGB’s forty years experience of expanding units we were able to considerably increase the usable floor area of a single standard footprint by expanding three of the four sides.  The contract included the supply of two triple expanding pods, a single expander and one standard pod without expansion.  Each pod includes equipment racks, work stations with desks, air conditioning, power systems, lighting and interior finishes.