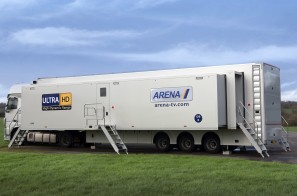 ASGB delivers the outside broadcast trailer of the future…

With the future of broadcasting predicted to be all-IP UHD HDR (Internet Protocol, Ultra-High Definition, High Dynamic Range) Arena Television (www.arena-tv.com) are leading the way with the first outside broadcast trailers containing this technology and ASGB are delighted to be Arena’s chosen coachbuilder.

With three new outside broadcast trailers planned, the first has already been delivered with the second trailer in production and scheduled for completion in June.  Designated OBX, OBY and OBZ respectively it is anticipated that OBZ will go into production later this year.

All three trailers are large triple expanders providing the maximum space possible for the specialist equipment and comfort of the operators.  As perhaps expected with market-leading technical innovation the interior is subject to an NDA and cannot be explained here but suffice to say ASGB’s craftsmanship has been applied throughout to provide a high quality finish to Arena’s new flagship OB

ASGB and Arena worked closely together on the trailer layout with different configurations considered to find the optimum for both the build and operation.  Of the journey from trailer concept to delivery Daf Rees, Arena Television’s Deputy Director of Operations says “Arena’s OBX, Y and Z will bring a new breed of OB vehicle to the industry, joining our extensive fleet. With a cutting edge IP infrastructure they will lead the 4K UHD OB revolution, not just in the UK but across the world. This pioneering concept can only be achieved by partnering with experts like ASGB to create a vehicle with the build quality and attention to detail that such a project demands.  At Arena, we know that being the best in class takes talent, skill and experience throughout the team and at all stages of production from concept to delivery – all attributes demonstrated in abundance at ASGB.”

Providing an interior space of approx. 65m2 for equipment and personnel these triple expanding outside broadcast trailers are fitted with ASGB’s custom-built air conditioning system delivering heating and 90kW of cooling for the comfort of the operators and to meet the demand of the equipment installed.  The compressor plant is contained entirely within the under-chassis lockers leaving the area from tip to toe of the trailer entirely for the client’s use; a feat that would not be possible with standard off-the-shelf air conditioning units of this volume.