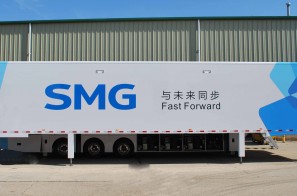 ASGB deliver the largest Outside Broadcast truck into Asia.

The vehicle incorporates two expanding sides, one an over expanding side, the whole length of the 14.6m trailer which opens to give an expansion in excess of 2.3m plus the conventional expanding side adding another 1.7m expansion, the floor area approximates to 88 square metres of usable OB space.  During the truck close up procedure, rack and desk movements are motorised , where ASGB designers have excelled in using all available stowage space to gain the maximum rack, fixed desk and moving desk sizes, utilising both horizontal as well as vertical movement to allow compact stowage.

The unit will be cooled by ASGB’s space saving chilled water air-conditioning system giving just over 90kW of cooling capacity.

The interior of the truck has been finished with modern looking modular pod style desks and there are feature areas such as a recombination desk where the client can configure the rear desk in Production 2 area either as a high capacity meeting table or as two further rows of operator desks including monitors and desk space by use of clever split folding desks.  A sumptuous VIP area is also included utilising the highest quality colour co-ordinated leather seats from Italy to allow VIP guests to relax and watch the programs being made or promotional videos for SMG on twin 40” screens.  Back lit SMG feature logos, RGB lighting, HMI repeater screens and wirelessly controlled privacy glass all add to a high tech and comfortable working environment.