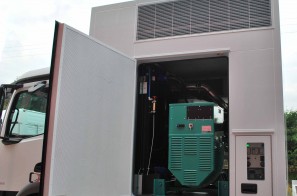 ASGB deliver another 1000 kW of power to Rygor Commercials Ltd

The pods used the tried and tested combination of Cummins QSL9G-3 engine and Mecc Alte ECO40 alternator but have many improvements incorporated since the release of the previous pods ordered in 2014.  The major improvements have been in the way the handed inter-cooler and radiator are connected to the engine, with simplified water pipe routes and connections, making the regular servicing items even more accessible than before.  Improvements were also made to the exhaust routing.  Pipework has now been designed and drawn up on CAD models, enabling accurate manufacture and easing the assembly process and reducing assembly times.

Work continues with each new customer order to improve the accessibility of serviceable components and to help reduce costs both in terms of servicing time and for subsequent builds.  Building on the successful introduction into service and trouble free operation of the initial pods, the repeat order shows confidence in the ASGB product and delivery times.