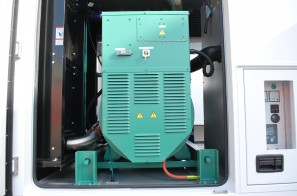 The pods were developed and fabricated from aluminium sheet to help reduce weight on the chassis front axle.

The generator set utilises a Cummins QSL9G3 engine coupled with a Mecc Alte alternator.  The set was manufactured with a control panel enclosure to the side housing the ComAp Intelilite controller and gauges.  An ASGB manufactured skirt locker provided the housing for eight output panels, five single phase and the remainder three phase which contained C-Form and Powerlock outlets.  The set can be switched  from 1ph to 3ph operation by an internally mounted changeover switch.

The set has an oil drain hand pump fitted, a facility to drain coolant to the outside of the enclosure as well as Racor Fuel filtering.

The pod when fully loaded runs easily within the declared 58dBA sound level at 3m free field.  The perforated sheet interior wall design, rock wool insulated panels and pod airflow design harmonise to ensure the compliance necessary for film and television studio or location work where nuisance external noise sources can be cause for concern with power generation.