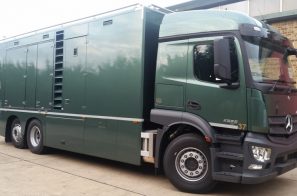 ASGB are pleased to confirm a new order from Film & TV Services.

Hot on the heels of the delivery of this new twin set generator to Film & TV Services, ASGB Ltd are pleased to announce a repeat order for an identical truck that started build in January 2017.

B17FTV as registered, is a 290kW twin set generator powered by Scania DC09 engines and Mecc Alte alternators built in a configuration which can see the truck used as a single 580kW set, as a load sharing synchronised set or as a run and standby set.

With fully coach built bodywork and the cab colour coded with the body, the vehicle looks an impressive sight.  This unit joins similar sister vehicles B16FTV and B19FTV in the Film & TV Services fleet.

The success and flexibility of the FTV/ASGB designed trucks has seen Film & TV Services invest in the build of a fourth truck of this style: B18 FTV – just ordered with ASGB.

The 26 ton 360HP Mercedes Actros chassis packs a lot of genset. Along with the twin generator sets, associated airways and exhaust chambers there are main and reserve fuel tanks, a pump transfer locker, a large front stowage area and very comprehensive single phase and three phase distribution panels within dedicated lockers.  Finished to a very high standard and fully IVA N3 compliant, the latest addition to the FTV fleet is certainly a head-turner but is totally designed and engineered to perform its function in the broadcast power market.